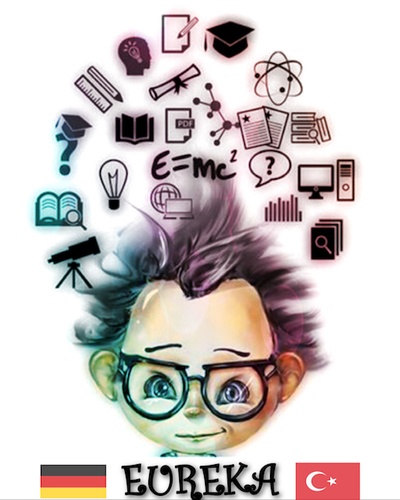 „Eureka“ is a bilateral project between Turkey and Germany. Students learn about what the invention is. Students understand the context of the key concepts related to the topic such as: Inventions are created to fulfill a common human need. Inventions are created to make humans’ lives easier. Europe is all about creativity and the continuous aspiration for innovation and improvement. So by inspiring from the European inventors who contributed significantly to the expanding influence of Europe in technics and technology, we learn why to invent and focus on our own inventions with this project. We suggest some ideas to invent a better world. We try to find the sudden and unexpected realization of the solution to the specific problem we defined, which called Eureka effect. Our students invent some things useful to them by deciding collaboratively.

Different web 2.0 tools are used to enhance the Project products. In order to create avatars tools named Myidol and Chatterpix are used. Some photo tools such as Pizap, photolab and Layout were used, for intro videos Flixpress. Answergarden, Menti, and Tricider were used to collect ideas and many games were created by Learningapps, Wordwall, Triventy and Apester. Presentation and digital magazine tools such as smore, joomag, google slides, genial.ly are also used. Collaborative activities are carried out via tools such as Zoho presentation, meetingwords, Thinglink and Google slides. We also used some other tools such as 4d anatomy, Tuerchen, Qr code creator, Hp reveal and Studystack. In the twinspace pages a weebly project webpage to disseminate the results was generated. News about the project were shared at school websites. Project trailer is created via iMovie tool.

Eureka led to some inventions and ideas coming to life by our students. They found solutions to make the world a better place. They made a difference in the world by taking an action. They found out that everyone had the capacity for invention. We all solve problems through inventive thinking, whether it’s figuring out a way to help a bird, or diving in an organic agriculture. Creative problem solving, improvisation, flexibility, and tinkering drive the inventive spirit. We have some Project products such as inventions dictionary, flashcards set, inventors posters, digital and poster presentations, board game etc. along with the ideas to invent a better world. Project ebooks, websites and displays are created as well. Promoting ICT practices, enrichment of the communication experience while practicing collaboration and teamwork, also engaging students‘ creativity and imagination are the other results. We showed the light and let the students come inside.